A Coordinate Measuring Machine (CMM) is a flexible measuring device used in the measurement of the physical geometrical characteristics of an object. A CMM can be controlled manually or by computer. It precisely records the X, Y and Z coordinates using a probe that is positioned manually by an operator, or automatically via direct computer control.

The coordinate measuring machine has been around since the early 1960s and has gone through many upgrades and improvements since. It is now used in almost every precision manufacturing company around the world, as over the decades, CMMs have become faster, more accurate and cheaper.

Some of these developments have included making structures stiffer, lighter and adapting thermally to enable use outside of a temperature controlled laboratory. The latest Renishaw 5 axis technology has allowed CMMs to measure critical parts and components, providing more information and more flexibility. 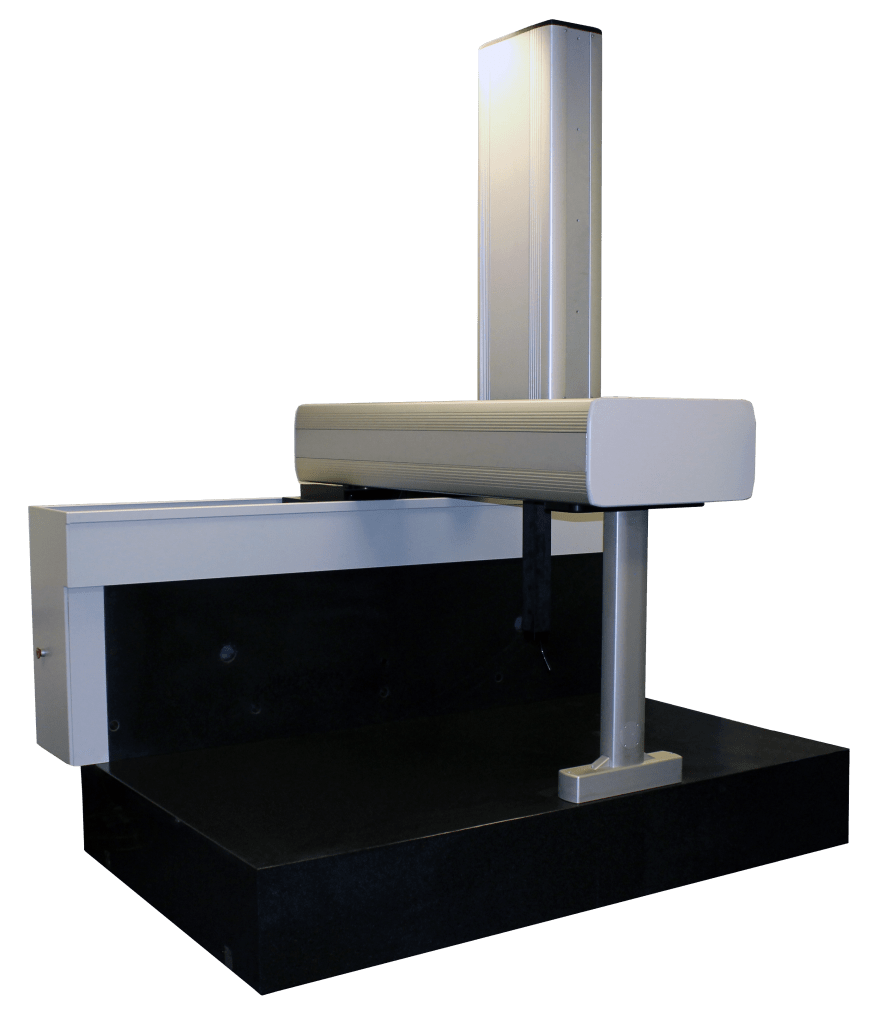 The Frustration of Coordinate Measuring

A coordinate measuring machine is an efficient carrier of non-tactile measuring probes such as lasers, scanners and optical sensors. Many suppliers now offer multi-sensor solutions which come complete with automatic probe changers. A traditional motorised indexing CMM probe head has limitations for both weight and index which affects the line of sight with optical sensors.

The increasing need for digital data means that tactile scanning will not be the only area with huge growth opportunities. Optical scanners with their long stand-offs are particularly finding favour, especially for sheet metal and plastic part inspection. The reason for this is that optical scanners are capable of digitalising complete part geometries with fewer sensor positions while completing the task in faster measuring time.

The traditional Cartesian CMM now has a competitor in the multi-axis industrial robot as it offers a lower cost, shop-hardened, robust and reliable mover which can carry the heavier optical scanners.

Solutions such as these have already penetrated the automotive sheet-metal application, which in turn finds many pioneering companies eliminating the CMMs. The seamless object orientated programming and measuring software that is used in conjunction with the robot, has dramatically reduced the device programming complexity.

The manual 6 axis portable arm has overwhelming advantages of portability over the manual CMM, offering more flexibility and dexterity. This has lead to very few CMM manufacturers even offering a manual Cartesian CMM in their product portfolio.

The CNC machine-shop has increased the use of on-machine-probing enabling part inspection to be performed during the metal-cutting cycle. The accuracy of metal-cutting machines is now on par with the CMM structures and the arguments of the CMM being an independent audit facility are being outweighed by the integrity of real-time adaptive control which minimises the production of defective parts.

The comparative gauging technique employed by Renishaw’s Equator offers a workable solution to measurement in the less than perfect environments. Offering a return to early production gauging principles which use master parts or reference gauges on the productions floor, negating the traditional CMM applications for the small production parts.

Recently a closed-loop feedback system with CNC machine-tools has been introduced. This will see coordinate metrology in the production machine shop moving securely into Industry 4.0.

The Consolidation of the Industry

The CMM industry has been reduced to just a few large suppliers over the past few decades. With the exception of China, where a ‘cottage industry’ still exists.

The Chinese domestic manufacturers use probing, measuring scales and software components from Europe and the USA that have limited product differentiation. Inevitably the CMM industry consolidation that happened in Europe and the US during the 1990s will come to China at some point.

If the more accurate CMM structure wishes to compete with the Industrial Robot, they will need to have a continuous motion wrist to enable the handling of the latest generation of optical sensors.

The accuracy of the Coordinate measuring machines is such that it should still have a significant role in the future providing it can overcome today’s limitation regarding carrying the next generation of sensors. If a 3 axis Cartesian structure has a heavy duty continuous motion wrist, it will outperform a 6 axis robot in accuracy and repeatability. In turn, this could open the door and allow the advantages of optical sensors to be utilised in a much wider field of applications.

Computed Tomography is beginning to encroach on the CMM market. Particularly where complex parts are produced using Additive Manufacturing techniques for intricate plastic parts. However, this technology is far more expensive, at present, than a CMM.

Coordinate measuring machines will continue their role in supporting the production of high accuracy parts in small shops. The CMM will also continue its audit role, in particular for critical medical and aerospace industries. CMMs are too ingrained in many companies to just simply stop being used.

So although the CMM is under threat from a variety of emerging measurement technologies, it can survive. If it creates more productive seamless programming software, higher performance motorised wrists and has the ability to adapt to new optical sensing technologies.

The future role of the coordinate measuring machine is set to change. However, the reluctance to discard older CMMs may mean that this change may occur slowly.