Surface plates and tables were one of the first types of metrology equipment. In 1800 British Inventor Henry Maudslay recognised the importance of a high precision surface plate. Named the father of the machine tool industry, Maudslay developed machinery that could produce identical tool parts. With his student Joseph Whitworth, they manufactured standardised and interchangeable parts. To ensure the parts they produced were standardised, a surface plate was required for precision tool production. The history of surface plates started with the development of mass production and continues to be important today. 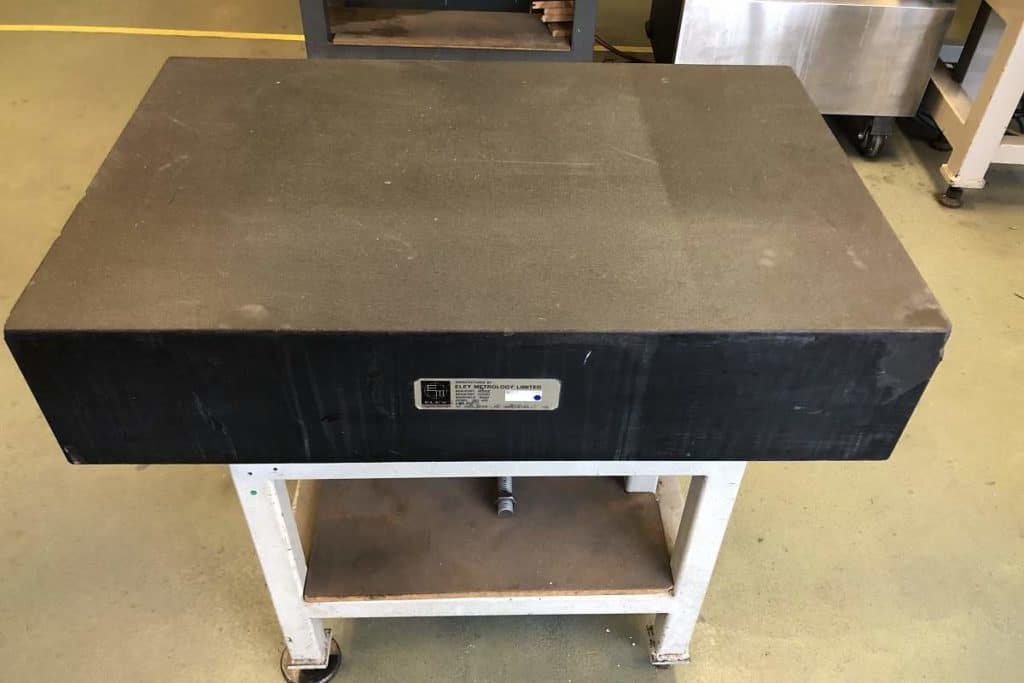 It Started with Metal

As Henry Maudslay and Joseph Whitworth worked together, there is some dispute over who was the inventor of the surface plate. In 1840 Whitworth wrote a paper “On producing True Planes or Surfaces on Metals” and presented this to the British Institute of Mechanical Engineers in 1856. In developing metal surface plates Maudslay and Whitworth created the system to scrape a cast iron plate to a flat plane.

The product range developed by Crown Windley included box angle plates, squares and master straight edges. Crown products were a fundamental need during the first and second world wars as precision engineering became a necessary part of the war effort.

The Introduction of Granite

In the 1940s, the demand for metal increased due to the second world war, but its availability limited. The introduction of granite for surface plates is credited to an American monument and metal shop owner called Wallace Herman. Along with his colleague Donald V Porter, they started using granite instead of metal for surface plates. It was soon established that black granite made a great alternative to metal due to its strength and vibration damping.

In Britain, Crown Windley also investigated granite as an alternative to metal and discovered it to be superior. Engineers working with iron had to spend a great amount of time to “stress relieve” an iron casting. As a natural substance granite has been weathering in the ground since time began so it is already stress-free!

The benefits of granite as a hard-wearing surface plate that is non-magnetic and resistant to corrosion meant that iron was no longer the preferred material.

As the engineering industry developed granite remained the preferred material for surface plates. In 2002, Crown Windley joined Eley Metrology. Eley had been manufacturing granite surface plates since 1976 and had started producing coordinate measuring machines with all granite guides. These are hand lapped to tolerances of 2 microns. Air bearings run superbly well on the high precision flatness and straightness that can be achieved with granite.

Eley’s coordinate measuring machines, as well as the ground-breaking Long Bore Machine (LBM), have the main bed and the X & Y Axis produced in granite. These plates are produced to limits that would be impossible in any other material other than granite.

Like all items employed during the engineering manufacturing processes, wear does take place. Even granite may need re-conditioning before certifying the flatness in accordance with BS817.

It is a great advantage to carry out the res-surfacing work on-site. There is no need to employ a large surface grinding machine. A skilled engineer can perform this work by hand even on the largest table within a matter of days.
Although granite is a hard-wearing material, damage can still occur. It is important to follow guidance on surface plate maintenance to ensure they stay in good working order.

Eley Metrology, along with Crown Windley personnel, continues with both the sale of new granite plates and the service support and resurfacing of those that require re-certification.

The History of Surface Plates

The surface plate could be considered an important but underrated tool in the history of engineering. Having a standard to work from to ensure parts could be machined consistently is of great importance to modern engineering. The skill and expertise in standardising equipment and tools over the decades have had the surface plate at the base of everything.

It has been 80 years since granite began as an alternative to cast iron and it is now completely established as the foundation to many standards in the metrology field. The coordinate measuring machine (CMM) and the Long Bore Machine (LBM) represent the ultimate acknowledgement of granite as the only material used in this vital area of metrology.